Founded in 1925, the collection housed in the Gallery on Via Crispi documents the Roman artistic environment in the period between the second half of the nineteenth century and the Second World War: masterpieces of sculpture, painting and graphics created by the great artists of the period: an evidence the best expressions of Roman art and history.

The collection preserved in the Gallery on Via Crispi, in the eighteenth-century convent of the Discalced Carmelite nuns, has pursued a very specific purpose since its birth in 1925: to document the Roman artistic milieu. Thus a superlative heritage of modern art, one of the finest in Rome today, has come down to us after nearly a century. Sculptures, paintings, drawings and prints: masterpieces of created by great artists between the second half of the 19th century and the middle of the 20th testify to the best of that era in Rome and recount the city’s history, not only its art. In 1925, the first core of the collection - bought in 1883 at the International Exhibition of Fine Arts and quickly augmented - opened to the public at Palazzo Caffarelli, on Capitol Hill. In 1931 its name was changed to Galleria Mussolini. At that time the Gallery hosted a highly representative collection of Italian art between the 19th and 20th centuries. But it was in the 1930s that the collection expanded considerably though acquisitions of works from art shows held in Rome. Those were years of extraordinary creative ferment, and the collection added works by Giorgio de Chirico, Mario Mafai, Scipione, Gino Severini, Giorgio Morandi, Giuseppe
Capogrossi, Afro, Alberto Savinio, Carlo Carrà, Mario Sironi, and by sculptors Arturo Martini, Marino Marini and Giacomo Manzù.Years after the Gallery was closed for renovation, in 2003, it is reopening with a new installation that meets modern museum standards. Visitors can admire a careful selection of works from the Gallery’s permanent collection, which contains more than three thousand pieces.The exhibition meanders among the different art movements present in Italy in the century-long period covered by the permanent collection, from Vincenzo Gemito’s Neapolitan realism to Nino Costa and Hirémy Hirschl’s symbolist aesthetics, from Adolfo De Carolis and Duilio Ciambellotti’s Liberty-style interpretations to the portraits painted by Roman Divisionists, to the artistic culture of the interwar period. Here the show illustrates Felice Carena’s rediscovery of classicism, Mario Sironi’s “Novecento” movement, Antonio Donghi’s Magic Realism and Enrico Prampolini’s Futurist explorations, and continues with masterpieces from the Thirties: Scipione and the Roman School in painting, Arturo Martini and Marino Marini in sculpture.

END_OF_DOCUMENT_TOKEN_TO_BE_REPLACED 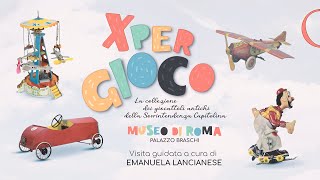 Unique events in some of the most extraordinary places in the world.
Servizi museali